The village of Soisy-sur-École was most probably founded during the Gallo-Roman era and is located in the middle of the Parc Naturel Régional du Gâtinais Français. It is crossed by the École River. The village is well-known for its art glassworks.

We suppose the village was inhabited during the Gallo-Roman era as Soisy-sur-École was built at the crossroads of two Roman roads : one going from Melun to Etampes and one going from Paris to Lyon.

The name of the village comes from the Latin “Soisiacum-juxta-Scolam” and was chosen during the 12th century. Previously, the village had several Latin names derived from Soisiacum.

The first written traces that were found about Soisy are dating back from 984 when the archbishop of Sens established a parish. The parish of Soisy was part of the archdiocese of Sens, the oldest existing in France.

During the 11th century, Soisy was in the middle of a political conflict about the Gâtinais. It belonged to the powerful counts d’Anjou (this family gave to the world the dynasty of Plantagenêt who then reigned in England) and the French King had no power upon them. It was only in 1064 that the Gâtinais joined the King’s territory in exchange for a protectorate. It was also at the end of this same century that the church was built.

The first castle des Réaux was also built during the 11th century and was part of an estate mostly made of farms. Then later, King Charles V chose Gilles Mallet, his royal bookseller to become the lord of Soisy. We suppose that the village was attacked by Englishmen during the Hundred Years War as it is very close to Milly-la-Forêt. The stone bridge just next to the Moulin des Réaux (a mill) was built during the 13th century and was an important crossing to go to the seigneury’s fields. Moreover, a lot of documents were found and are historically very interesting as they describe the daily life in the village during the Middle Age. During the 14th century, Soisy-sur-École, as well as the whole country, had to go through several deadly events : wars, famines, epidemics, especially the black plague which killed a lot of people in the village.

During the 17th century, the farm de Limery was described as the seigneury du Grand Limery and had a manor and a dovecote. At the time, dovecotes were considered as a mark of wealth because only nobles and lords were allowed to build one.

During the 18th century, the estate des Réaux was only made of a farm and the castle. The owners, the family d’Averton, was ruined and gave the estate to the count de Cély. Then, after the French Revolution, Soisy joined the diocese of Versailles.

It was in 1868 that the heiress of la Compagnie des Gaz, the countess Sophie Osmont du Tillet bought the castle. She and her son made some work to modify the castle as we can see nowadays. In 1869, the Moulin des Réaux was mostly destroyed following a big fire. During the Franco-Prussian war, a high number of inhabitants were enrolled to join the battlefield. Despite conflicts in nearby villages, Soisy was spared and had no damages.

During the interwar period, the village improved a lot with its services with transport, education, water access and electricity.

During World War II, the population of Soisy dropped a lot because of the war : a lot of men were on the battlefront and a lot of inhabitants ran away from home as Germans were winning battles. Also, a lot of refugees came to the village. From 1940, Germans occupied the village and stole the castle des Réaux. On the 22nd of August 1944, American soldiers arrived in Soisy. Germans were defending themselves in the park of the castle and holding several inhabitants hostage, especially women and children. Three allies died while they were trying to save lives : Jean Bonnafé, a war veteran, Ernest Loste, the mayor of Soisy-sur-École and Antonio Annibali, a medic of the US Army. Resistants and Americans freed the village.

During the 60s, Niki de Saint Phalle and her husband Jean Tinguely decided to live in Soisy-sur-École and settled in the old Auberge au Cheval Blanc. They even married in the village. Niki de Saint Phalle made her famous “Monstre de Soisy” in her workshop of Soisy. This sculpture can be seen in the museum Centre Pompidou in Paris.

The Church of Saint-Aignan

Soisy-sur-École became a parish in 984. The frames were expertised and it was determined that the church was built during the 12th century. A beam situated at the entry of the church has an inscription dating it from 1116. The choir’s spans, the aisle and the bell tower are from 1150. The keystones are adorned with coats-of-arms and fleurs de lys.

The nave and South aisle were built during the 15th century in order to extend the church. In 1830, the bell tower and part of the roof were elevated. The contrast between the old choir and the nave is something regularly seen in the Gâtinais.

The church of Soisy-sur-École was classified as part of the Monuments Historiques in 1989. Some furniture is also classified, especially some paintings. Several tombstones can be seen along the choir’s walls. One is dated from 1327 and belonged to Sir Jehan Vaudoué and his wife Marguerite.

For more than 40 years, the art glassworks of Soisy-sur-École has been opening its doors for curious to show you the magical work of blown glass. The workshop can be visited so you can see the glass blowers working. The shop is also open to the public and has numerous original creations.

It was during the 12th century that the first castle des Réaux was built. It was an estate with a castle and farms. During its reign, King Charles V gave the estate to his own royal bookseller Gilles Mallet. He then became the lord.

During the 18th century, the seigneury des Réaux was only made of a farm and the castle. A lot of owners owned the estate and its architecture changed a lot throughout the years. The current castle as seen nowadays was modified during the 19th century by Edouard Osmont du Tillet.

During World War II, Germans stole the castle and occupied the village from 1940 until 1944.

Since the 70s, the castle des Réaux has been used as housing for older people.

The wash-house was built during the 19th century along the École River and close to the Moulin des Réaux. It was ruined for a very long time and then restored in 2016 by local artisans and inhabitants in order to recreate its original cachet. 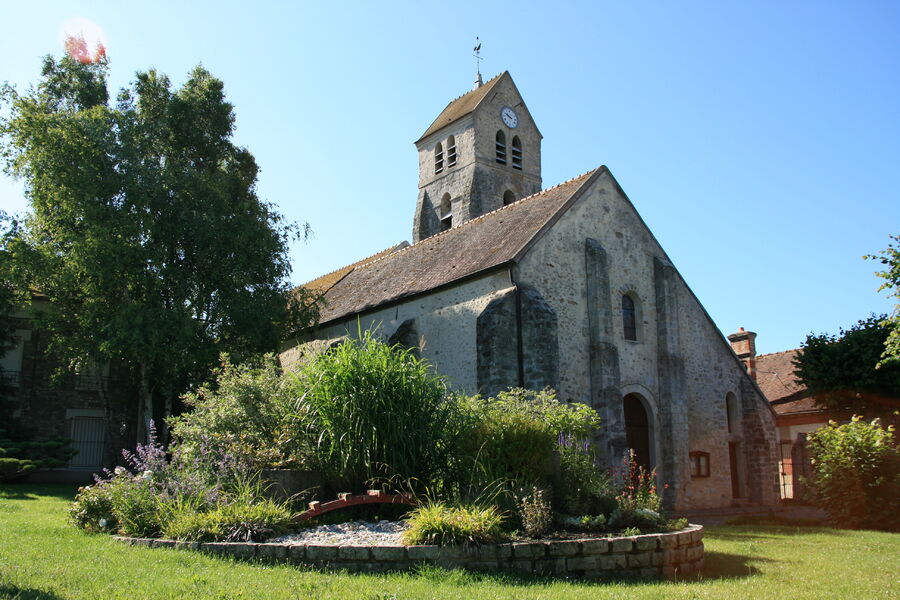 At the heart of the Regional Natural Park of Gâtinais Français, the Glassworks of Art of Soisy sur Ecole opened its doors in 1978, created by a family of glass tradition, owner of the Glassworks "La-Rochère" since 1856.

Different centuries are intertwined in the church of Soisy-sur-École which gives it an unique and historical aura.