Dannemois is a lovely village crossed by the École River. Its history is rich, full of mysteries and development. Also, the village is famous because it was an important place of leisure for celebrities during the 20th century such as Claude François, Jean Tinguely or Niki de Saint Phalle.

Several archeological digs in Dannemois throughout the years had excavated some proof of human presence back in the Mesolithic era.

The church of Dannemois was built during the 12th century. Also, we can trace the existence of lords in the village back in 1120. A mysterious tombstone in the cemetery could be the burial site of a templar.

The name of Dannemois was once spelled as Dapnemoy. It is mentioned in some texts from the 13th century, then, the spelling changed slowly until now. Its origin is not clear : it could either come from the Latin word “dominus” (which means master/lord) or it could either be the distortion of the name Dannemonia, a saint who used to be a nun.

When the lord Robert de Dannemois died during the Middle Age, his seigneury was split in two parts for both his daughters Marie and Jeanne : one was owning le Châtelet (south of the village), and the other was owning la Louvetière (the north part of the village). Different lords ruled in le Châtelet but nowadays everything has been destroyed and there is no trace remaining of this seigneury. La Louvetière was a seigneury with a castle adjoining the church. The legend goes that the castle could have been once a templar farm. This castle was the property of the Melun counts for a long time, until the French Revolution when it became a house.

At the end of the 16th century, Dannemois was a transit point for King Henri IV when he was going from Paris to Malesherbes to see his mistress and favourite Henriette d’Entragues.

In 1601, the seigneury of Dannemois was unified after 250 years of being apart when Pierre Clausse and, then Claude Gallard, lords of Courances, bought it. Gallard was a councilman and the secretary of the king. In 1652, during la Fronde (a French civil war from 1648 to 1653), the village was looted and archives were destroyed. During these troubled times, several people have been the victim of the Gâtinais’ Beast. Indeed, the city of Etampes was looted and people killed so some wolves fed themselves with human bodies. After that, those wolves started to attack humans in the whole Gâtinais. The wolf was considered harmful for a very long time. Wolves were present in the Gâtinais until World War I.

At the beginning of the 20th century, Dannemois stopped being the property of the lords of Courances. At the same time, the village flourished thanks to its sandstone quarries. In 1832, abbot Gouaux held a register of the victims of the cholera epidemic in Dannemois. In two months, 18 persons were infected.

During the Franco-Prussian war in 1870, the village was looted and burnt following a battle between the two armies. Dozens of deaths were counted for both, and Prussians lost two important princes. It was only in 1880 that the village was able to restore one of the mills. The 1st of January 1900, the choir of the church collapsed. A lot of testimonies have been found relating to the damages the Franco-Prussian war and the events following it had on the calm village of Dannemois.

In 1964, Claude François, a famous French singer, bought one of the mills along the École River to make it his secondary residence to rest with his family between two tours. He was buried in the village’s cemetery when he died in 1978. His tombstone and his mill, which is nowadays a museum dedicated to him, are pilgrimage sites for his fans.

In 1970, the manor of la Louvetière was bought by the famous sculpting couple Jean Tinguely and Niki de Saint-Phalle. They lived here for a while when they were making the Cyclop located in Milly-la-Forêt.

The construction of the church began during the end of the 11th century. The nave and the bell tower are from this era and both have a typical Roman style from the Gâtinais. The parish belonged to the diocese of Sens until the French Revolution. The Gothic style choir was built during the 14th century. It was so damaged by time, wars, fires and weather that it collapsed on the 1st of January 1900. Its ruins are still standing and the base of the bell tower is used as the choir.

The side entrance was built during the 15th century and is protected by a canopy. The baptismal font is from the Renaissance. Two tombstones can be seen inside of the church. They were found in the 60s during some excavation at the place of the collapsed choir. One of those tombstones belonged to André Pailler who was once the lord of Dannemois.

Thanks to some work inside the church, we have been able to find traces of coal and debris to identify three different fires the church went through : the first one by the Navarrans during the Hundred Years War, the second during the Fronde (French civil war) and then, the last one by the Prussians in 1870.

In 2009, the church was restored and a very large stained-glass window was added, it has a view onto the ruined choir. This addition gives an impression of magnificence and depth to the church. The nave and the bell tower were classified as part of the Monuments Historiques in 1926.

In 1964, Claude François bought a mill from the 12th century in Dannemois. He wanted to find a place to live and rest with his family, far from Paris’ rush and his tours. He lived in the mill for 14 years until his sudden death in 1978.

During all those years, he did a lot of work on his house to make it the perfect fairy place he was wishing for. It was inspired by his american dream. He was inviting a lot of his celebrity friends in his mill such as Johnny Hallyday, Brigitte Bardot, Michel Sardou and Dalida.

In 1973, the mill was devastated by a big fire. The singer lost a lot of his memories during this fire. The mill inspired several of his songs such as “La Ferme du Bonheur”, “Comme d’Habitude” and “Le Lundi au Soleil”.

After his death, his mill was abandoned for 20 years until it was bought in 1998 by Mister and Misses Lescure. They made a museum about Claude François where you can discover where he lived, his own personal objects and furniture. A lot of his scene costumes, cars, golden discs, his English garden,... Sometimes, you can enjoy some singing and dancing shows.

As Dannemois is located along the École River, numerous wash-houses were built. It is the village of the area which has the most wash-houses still standing, some are private and others are public.

The Mardelas Wash-House is located on the left bank of the École River. It is a discreet and rural wash-house with an old framework and flat tiles.

The Croix de Loutre Wash-House is located downstream the bridge. This sweet wash-house has a very nice framework made of old wood with handmade details. In front of it, at the other side of the bridge, there is another small public wash-house.

The Pré du Châtelet Wash-House is located on the street “rue du Moulin à l’Huile”. It was built in 1890 and possesses a beautiful chimney.

Between the church and the cemetery, a weird object fixated to the wall catches your attention. It is an old snowplow. In the past, it was used on tractors and horses by farmers to shovel snow off the roads.

There are several wells in the village. You can easily see the most known one which is named “puits de Loutre”. It is located in the middle of a small flower field, at the corner of two roads just next to the Croix de Loutre. 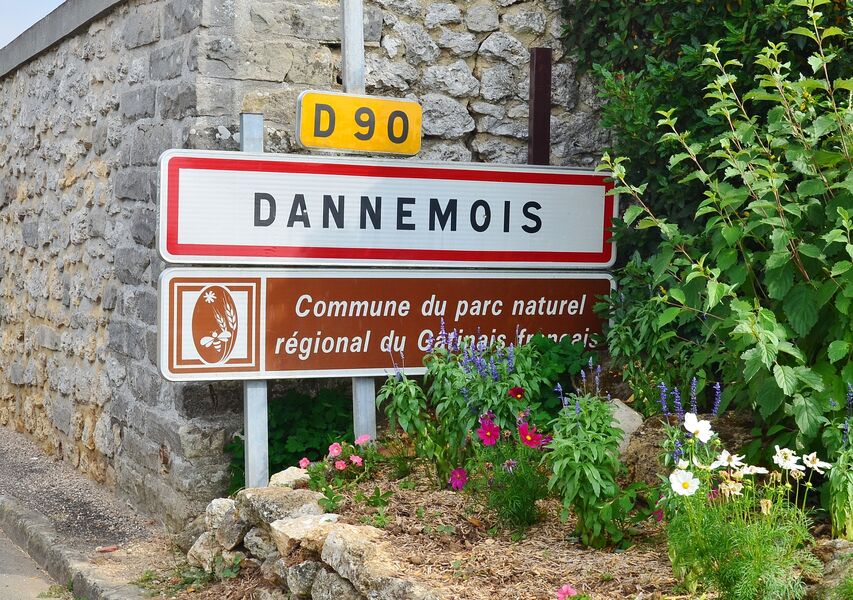 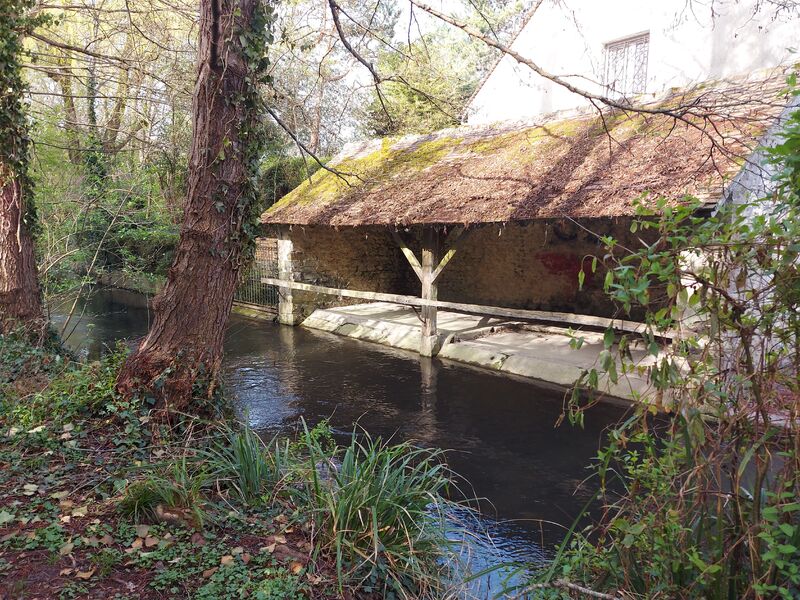 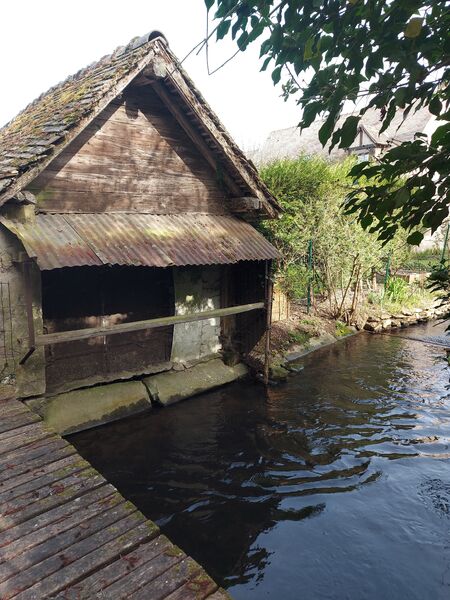 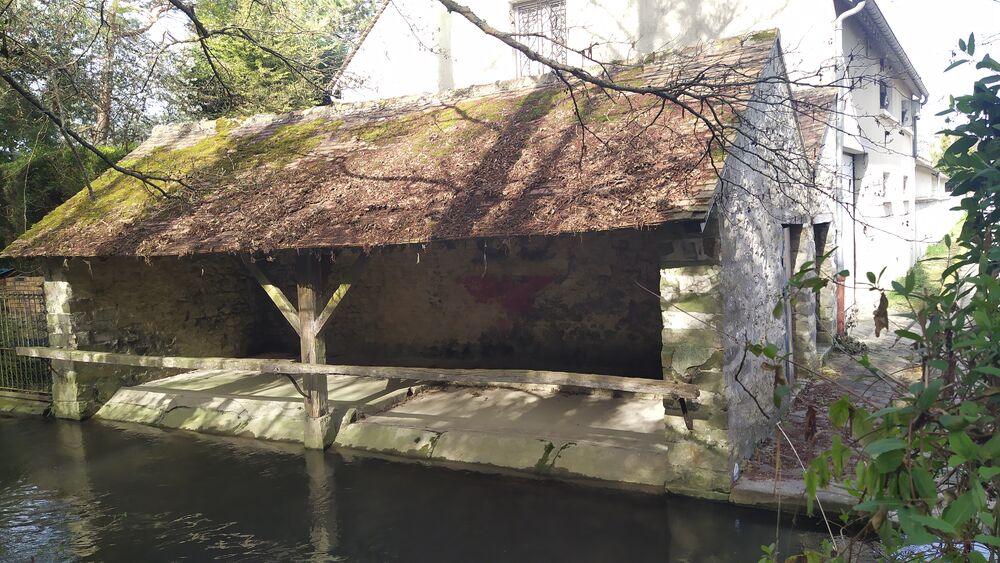 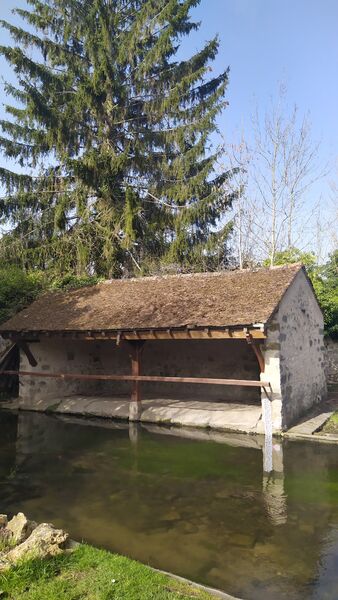 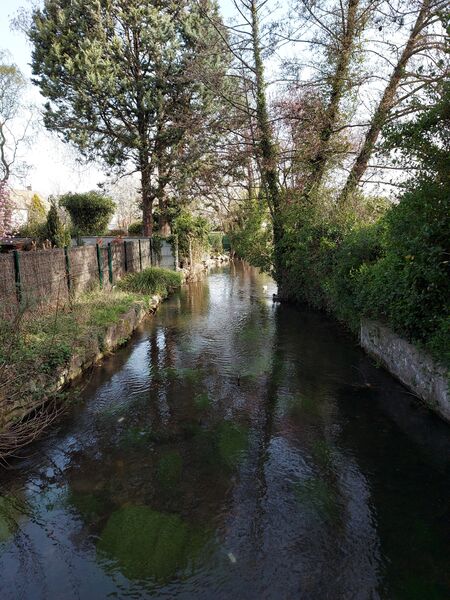 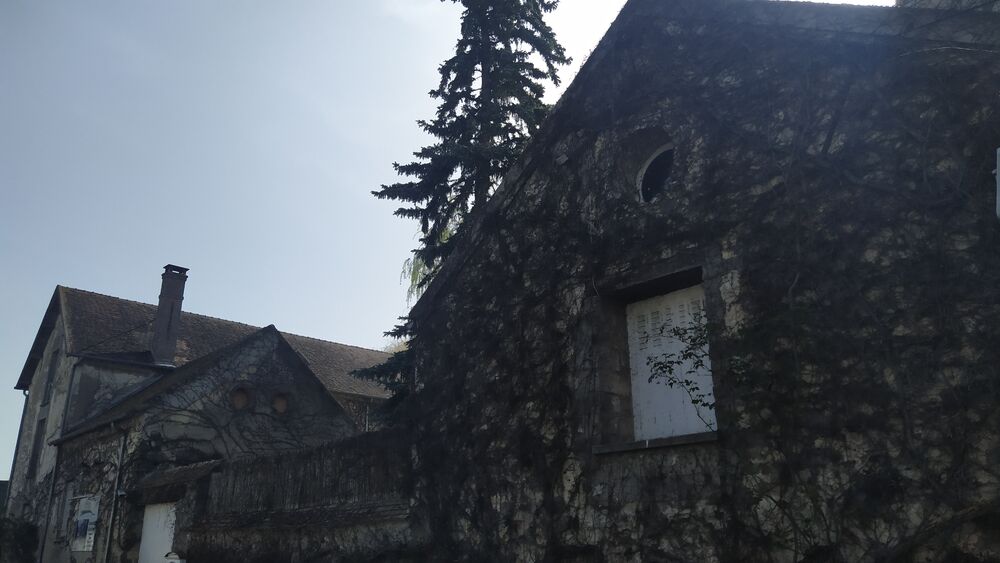 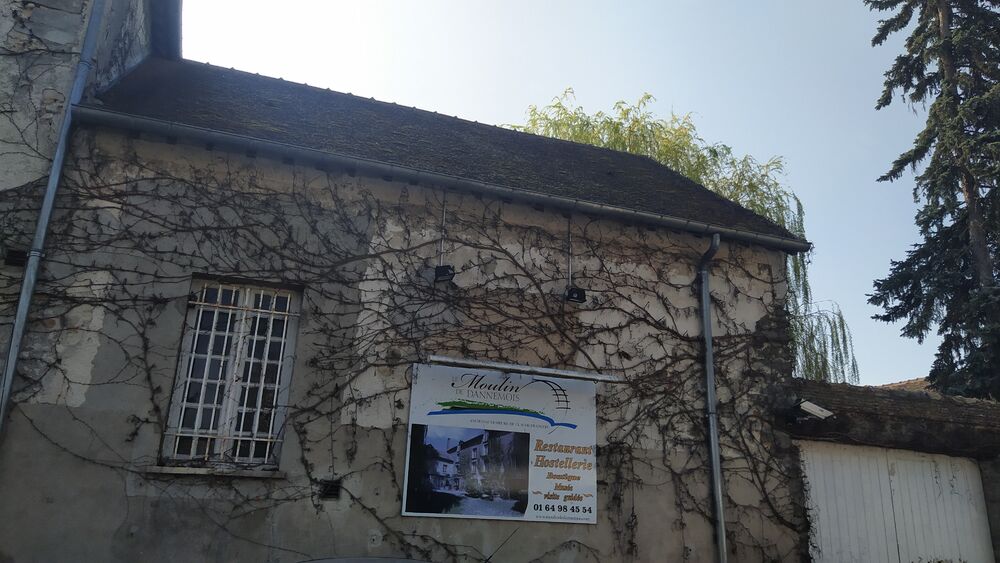 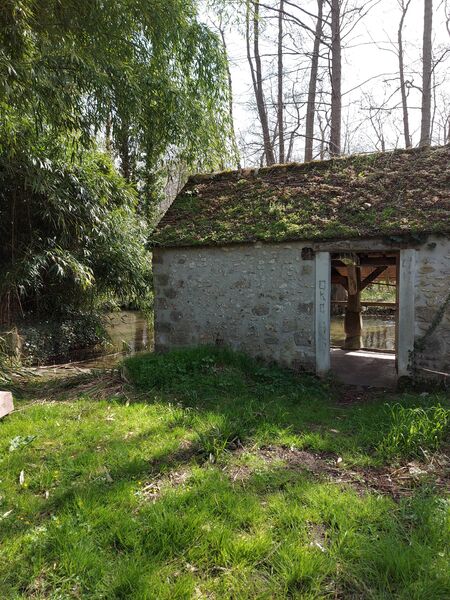 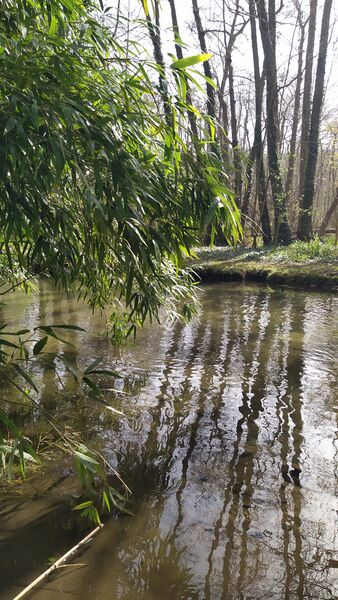 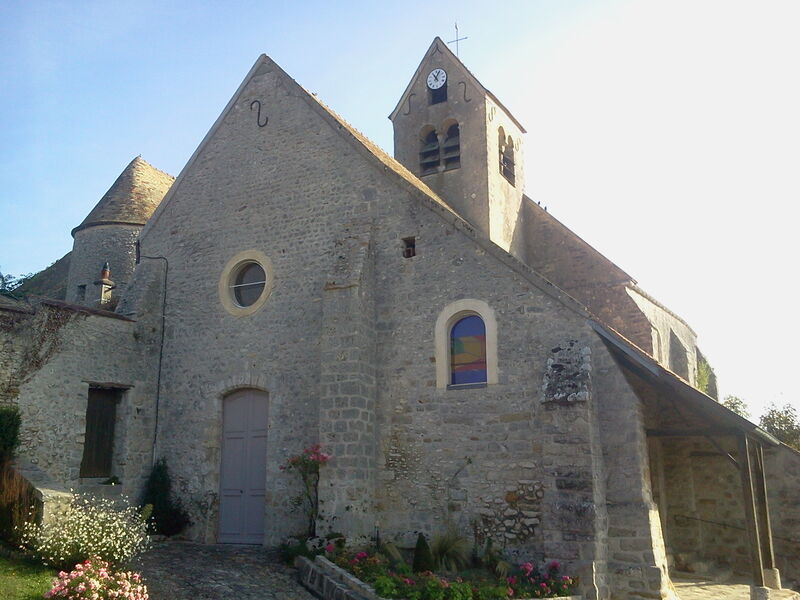 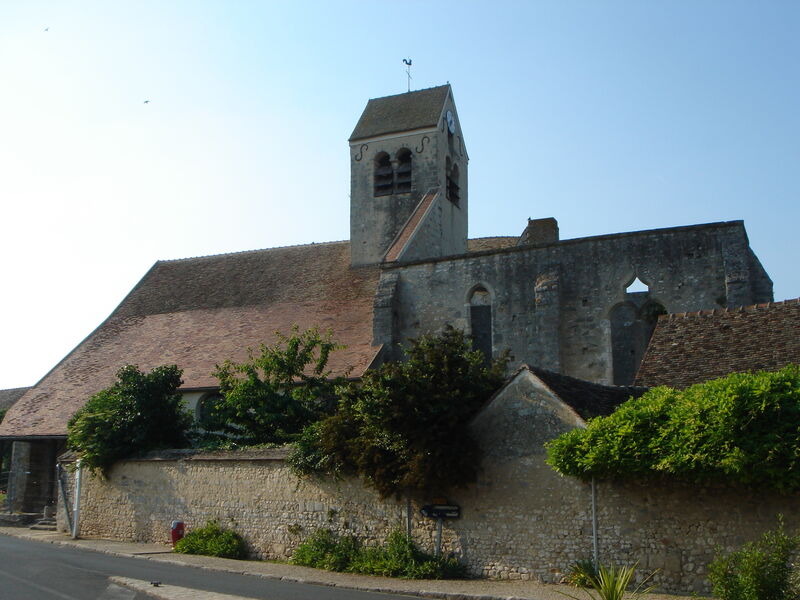 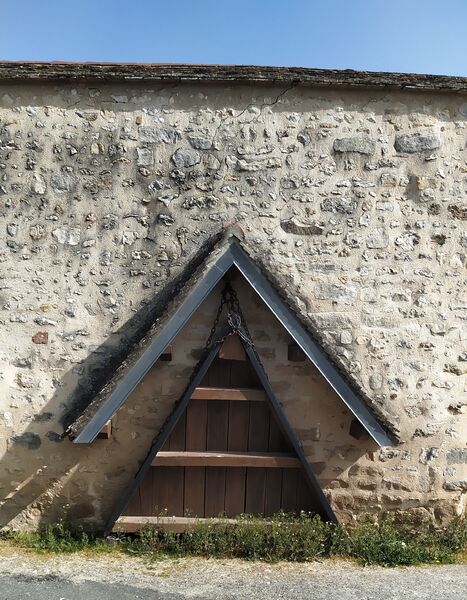 In 1964, Claude François, looking for a peaceful place for his days off, discovers a water mill of the twelfth century in the pretty village of Dannemois.

The Mill of Dannemois' restaurant