From the Neolithic period to nowadays, Buno-Bonnevaux always has been a village with a rich history. It is crossed by the Essonne River. It is a very calm and peaceful village with a few ponds that are very appreciated by fishermen. There is also an airfield specialized in gliding.

It is proved that some populations were living here for thousands of years BC. A lot of vestiges dating from the Mesolithic and Neolithic eras have been found throughout the years, such as rock engraving, carved stones, menhirs,... In 1975, a very important sepulchral site from the Bronze Age was found in Buno-Bonnevaux. More than 400 burials were found and numerous cinerary urns still containing some bones and ashes.

The village’s name has some varied origins : Buno is a Gallic name meaning “estate of Bonou”. Bonnevaux comes from the Germanic term meaning “vale of Bonne”. As early as the 12th century, the names of Bunetum-Castrum and Bonavallis are used. The word “castrum” refers to the Roman camps, so it is supposed that one was installed in the area.

During the Middle Age, the village was split into two different parishes : Bunovilla (the village center and the church) and Buno Castrum (around the castle located in the locality of Petit-Gironville). During this turbulent period, lords were changing a lot to rule the territory. Among them, we can count in the famous chancellor Michel de l’Hospital and Henri Montmorency-Damville, a constable of France.

In 1794, the two villages of Buno and Bonnevaux merged to make only one village under the name of Bonnevant Bano. The current name of Buno-Bonnevaux has only been used since 1801. The population of the village used to live thanks to its agriculture, crafts and sandstone quarries.

During the 20th century, the village went through several fluctuations of population. Indeed, a lot of people are leaving the village to work in bigger cities, also events like wars impacted a lot of the inhabitants. The 22th of August 1944, Buno-Bonnevaux was freed by the American Army after a few days of confrontation against the Germans who destroyed several bridges around the village.

The church of Buno-Bonnevaux is situated on a small mound and dominates the village square, which once used to be the cemetery. It is hard to date the original building as it changed a lot, but the choir, the apses and the bell tower are mostly from the 12th century. A lot of work was done during the 15th century : the arches, the windows and part of the frame changed. The frame was restored again later. But why is so much work done ? The main hypothesis is that the church could have been partly destroyed during the Hundred Years War.

The church has quite an original style. The building is composed of different materials : sandstone, limestone and bricks. The north part of the nave is connected to a roof of the aisle, the aisle also having a peaked roof. This gives the illusion of a double nave to the church. The church is dominated by the two storey bell tower, which has been restored at the end of the 19th century and at the beginning of the 20th century. The sacristy is more recent than the rest of the church.

Inside of the church, there is the tombstone of Cyrille d’Arbouville, a lord of Buno who died in 1531, and his wife Loyse du Puy. This tombstone is classified as part of the Monuments Historiques.

From 1870 to 1960, Buno-Bonnevaux was a place of pilgrimage where the Sacré-Cœur of Jesus was celebrated. Those celebrations were encouraged by Marguerite-Marie, a canonized nun. The procession used to walk to the hill of Moignanville where the baron de Limnander (who had a castle at the same place) made a giant statue. This pilgrimage was mostly made by women who wanted to have kids.

Wayside crosses are some religious symbols for Catholics. Those crosses have been used since the Middle Age and mark the christianisation of a place, and also it helps people to find their way. A lot of crosses can be found in the French countryside, Buno-Bonnevaux is part of it. Nowadays, we still can see four wayside crosses in the village :

The cross du Curé Garnier is a donation of a parish priest and is dating from the 17th century to replace by a stone cross the old iron cross. When the cemetery moved, a new cross mixing iron and stone was made.

The cross Saint-Paul can be seen on the Chemin de la Vieille Marmotte (it was once the name of a headscarf women used to wear in the area). It is a metal cross decorated with flowers, fruits and a paschal lamb.

The cross Frappeau is from the 19th century and is made of iron. It is located near the locality of Chantambre. Its name comes from a local legend where a traveler screamed “frappez haut, frappez haut” as he was attacked by robbers.

The cross du Bois Sec is situated at the crossroad of Chemin de la Vallée and Rue de la Brosse. It is a cast bronze cross dating from the 19th century with Christ on the cross on it.

The polisher “des sept Coups d’épée” (the Seven sword strikes) is a sandstone rock located next to the church. It has been discovered on the plateau which dominates the Essonne Valley. This polisher has been named like this as a result of the seven cuts that striped the rock. It was classified as part of the Monuments Historiques in 1928.

This castle has a central building dating from 1612. The towers are from the 19th century. At the beginning of the 20th century, it was the property of René Lacoste, a famous French tennis player who won several Grand Slam tournaments in his career. Also, he is famous for creating the brand Lacoste, represented by a crocodile.

The pilgrimage of the Sacré-Cœur of Jesus used to end near this castle. The old castle was destroyed many years ago and now has been replaced by an impressive bourgeois house hiding in the middle of the forest.

The Castle of Buno

The medieval castle was located in the locality of Petit-Gironville. King Louis XI even stayed in this castle in 1480. During the 16th century, it was partly destroyed by robbers who were terrorizing the area at the time. At the beginning of the 20th century, a castle inspired by the medieval style was built but then was destroyed by the Germans during World War II. Today, the castle is a simple building made of stones.

At first, it was a succession of buildings at the place of the current castle which had been built during the 18th century. The dovecote is older and was probably part of one of the older buildings. It is the same thing for the chapel which is dating from the 11th or 12th century. Once, it was a church but part of it has been destroyed because it was in bad condition. The chapel has been classified as part of the Monuments Historiques since 1950.

Early on, the Essonne River was used by the village’s inhabitants. Several mills were built along the river and next to bridges.Two outstanding mills still remain. The Moulin Roijau worked until the 20th century. It was partly destroyed in August 1944 when Buno-Bonnevaux was freed. Nowadays, this mill is a house. The Moulin du Petit Gironville was used from the 17th century to 1920. It was also damaged in August 1944 but then it was restored and a hydraulic wheel was added.

At the time, a lot of wash-houses were located all along the Essonne River. Nowadays, two can still be seen in Buno-Bonnevaux : one in the village center and one in the locality of Chantambre.

The river provided the construction of a pond in the village, located on Route de Chantambre. It is very appreciated by fishermen and also it is a nice place to relax. 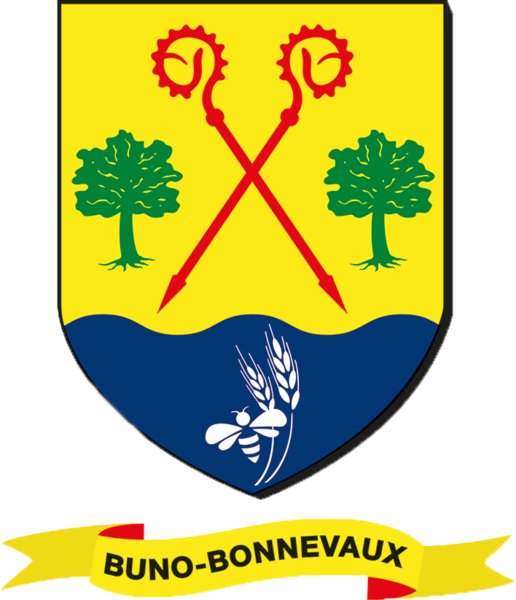 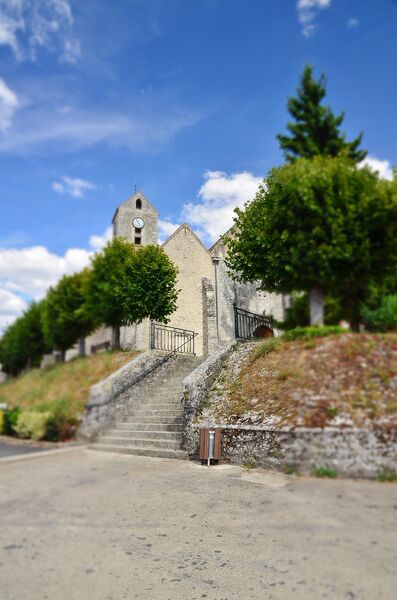 The church of Buno-Bonnevaux was built from the 12th century and then greatly restored during the 15th century after the Hundred Years War.

The aerodrome of Buno Bonnevaux is one of the most important gliding center in France, not far from the forest Forêt de Fontainebleau.